Brenton and Sheila Ford resigned from Parts & Power in September to move to Sheila’s home country of Scotland.  Sheila had traveled to Scotland in July for her father’s funeral.  Due to the Covid border closure in the BVI, the process to return was taking a long time.  That, combined with family obligations, made her decide to remain in Scotland.  Brenton, and their dog Shaggy, packed up in late October to join Sheila in Scotland. Parts & Power wish Sheila and Brenton (and Shaggy) the best of success in their new endeavors in Scotland.  They will be missed. 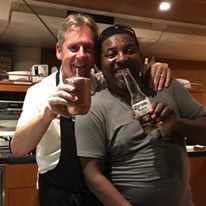 ton is shown on right in the photo with Robin Hales of Parts & Power during a Poker Run in June of 2019.