In December of 2020, Mike Bingley and Sim Hoggarth of Palm Tree Marine in Grenada were asked by a customer if they could change the generator end on his yacht’s Northern Lights Generator.  “No problem,” they said.  Then they found out that the generator was on the 144 ft mega yacht “King Baby” moored at Port Louis marina in St. George’s harbour.  Not only was the generator end over 900lbs, but it would also require negotiating the huge alternator through a circuitous route in the immaculate interior of the yacht.  It took some clever engineering to make ramps and lifting gear to move the old alternator out of the vessel, then move the new one in.  The captain was at first concerned about having the work done in the Caribbean.  But Palm Tree Marine is an authorized Northern Lights Dealer and they soon put his mind at ease with their professionalism.  With good engineering and careful hands-on work, they removed the old alternator in 2 days.  Having set up everything already, Palm Tree was ready when the new alternator arrived and got it installed within budget and on time.

Palm Tree Marine has been in business since ­­­­­­­­­­­­­­2007 and were appointed as Northern Lights Dealers in Grenada soon thereafter.  They regularly assist Northern Lights customers with competent and cost effective repairs and repowers.  For more information, contact Sim Hoggarth in Clarkes’ Court Boatyard, St Georges, Grenada on +1-473-407-2782 or email sim@palmtreemarine.com. 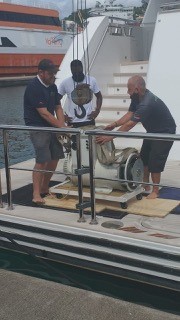 Mike and Jason wrestle the alternator into position on the aft deck. 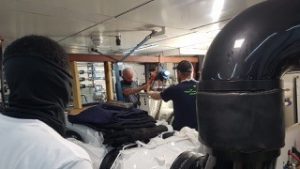 King Baby’s chief engineer looks on as Mike and Jason lift the 900lb alternator off the generator. 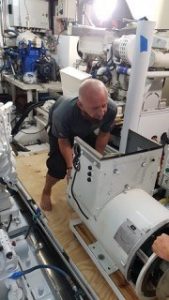 Mike Bingley carefully pushes the new alternator on its custom made trolley.