Most Caribbean Countries are on lockdown due to the Coronavirus Pandemic.  With few exceptions, all Caribbean Countries are restricting anyone, other than Essential Workers, from leaving their own yard.  Although most Caribbean Northern Lights Dealers are Essential Workers in their own counties, there is very little work to require anyone from going out.  With this in mind, Robin Hales and Gavin Dooley, from Parts & Power, organized an online training meeting with all the Caribbean Dealers.  It was a good opportunity for everyone to get together and discuss the Northern Lights Product, and the Northern Lights and CaribbeanNorthernLights.com websites.  Rob hosted the event, and Gavin was our trainer.

“It is important, in this time of isolation, for everyone to remain engaged,” Robin Hales said.  “I thought it was also an excellent time for us all to get together to talk about the Northern Lights Product.”  It is not very often when we can get the attention of our very busy Dealers.  So, I wanted to take advantage of the fact that most people were in isolation.  Besides, I have not had an opportunity to meet with some of our Dealers, especially with planned travel being postponed at this time” he said.  “Although face to face meetings are not possible, this was the next best thing.  This was so successful that we will hold a follow up meeting next week.”

Parts and Power Ltd, together with their Northern Lights Dealer Import Supply, based in Charlotte Amalie, represented Northern Lights at the USVI Professional Yacht Charter Show on Monday 11th November 2019, the Vendor Show.
This premier event in the US Virgin Islands for charter brokers and crewed yachts is a unique opportunity to display the very best of sail and power catamarans, monohulls and luxury motor yachts in one location. It also allows the crews, managers and local vendors to kick off their Caribbean season and present themselves and their services.

Tony Tuckett and Robin Hales from Parts and Power Ltd, together with Mark van den Driessche, owner of Import Supply, St Thomas, were on hand to present and discuss Northern Lights generators, parts and service with the attendees. With over 75 boats on the docks this was a very busy and productive event. Topics of discussion ranged from new generators to technical support and preventative maintenance.

This was the first opportunity for many Owners and Captains to discuss their requirements for the coming season. It was also a great introduction to the new dealer Import Supply. It was obvious that having support in the US Virgin Islands is very much appreciated.

Parts and Power Ltd wish Import Supply the very best for the coming season and look forward to working closely in the future. 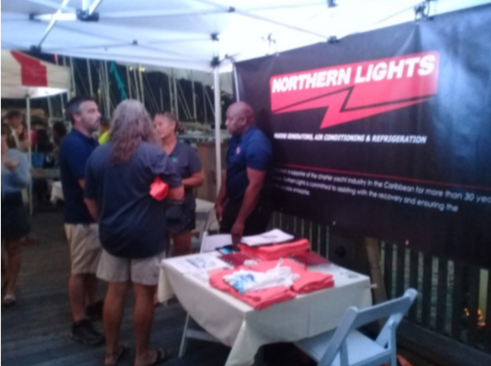 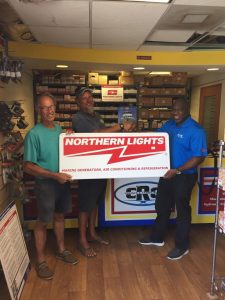 On Feb 6th 2019, Parts & Power salesman, Tony Tuckett, met with the Caribbean’s most recent Northern Lights Dealer, CRC Engines and Fabrication of the Valley, Virgin Gorda.  Pictured are Tony and Geoff Cooke.  Behind the sign is company founder, Chris Cooke.  CRC was founded in 1993 on Virgin Gorda.  The company provides Marine and Industrial Engine & Generator service, as well as fabrication.  They are a major sub-contractor for the Boat Yard at Virgin Gorda Yacht Harbour.

CRC are dealers for Yanmar, Yamaha, Algae X Fuel Conditioner.  With their expansion to Northern Lights, they now represent the preferred choice of most charter crews, and many bareboat fleets in the Caribbean.

Marine Maintenance Services based in Nanny Cay Tortola has just completed a double generator change aboard a Privilege Alliaura 62.  This yacht is used for Crewed Charter & relies on its generators to keep the whole show on the road.

The original generators were Onan.  When it came to decide on which option suited the boat for replacement, the crew chose the Northern Lights due to the reliability, simplicity & parts availability.  As a result, we installed 2 x Northern Lights M844LW3 16kw 50hz units.  They were mounted on secondary vibration pads & had sound shields installed.

The crew are super happy with the result.  The generators are whisper quiet and vibration free.  We hope they have a great 2019 season.

Understanding EPA Tier requirements can be a challenge for even the most experienced boaters. To clarify the issues around Tier III generator requirements, the experts at Northern Lights have prepared the following FAQ’s. Download the PDF from this link: Sales Bulletin – Questions about US EPA Tier III Compliance for Marine Generators?

Northern Lights, Inc. (NLI) is pleased to announce the release of two new models – the M944W3F and M944T3F. 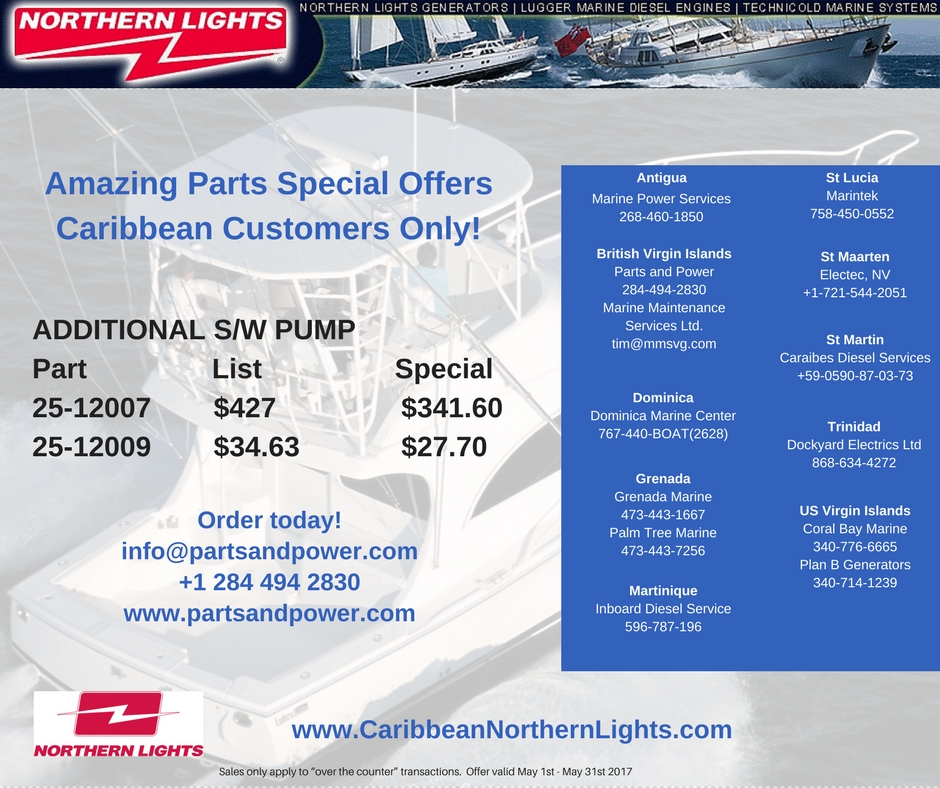 Starting in June, Northern Lights is changing their DC Logic for the first time in over 40 years.  The affected generators include marine units from M673LD3 through M944T sizes – including commercial marine sets through the M40C3.  The first difference you will see is that the generators will be coming with a different plug.

The connector will change from the black, round connector (known as the “Merc plug”) to a gray, rectangular Deutsch DT plug.

Deutsch DT series connectors are rugged and weatherproof and are common to many transportation wiring systems.  Northern Lights DC Logic remains simple and easy to diagnose. The new relay logic will provide easier installation of advanced control panels being offered by the factory.  Below are links to the old wiring schematic versus the new wiring schematic.  A limited number of generators with the old DC wiring are still available. Contact Parts & Power in Tortola, or your nearest Caribbean dealer, for more information.

The Charter Yacht Show was very successful with 105 yachts ranging in size from 62 ft to 296 ft. In addition there were another 40-50 yachts in Falmouth Harbour which were not in the Show.

They found many of the yachts had Northern Lights products on them, both generators and Lugger propulsion engines. In most cases they received nothing but favorable reports from Engineers and Captains. A few vessels had questions or problems on their equipment that the team was able to address. In many cases the NL representatives found a recurring theme that they had discovered at previous shows. Many of the NL customers simply needed advice on how to maintain their Northern Lights equipment, and where to go to get information. In some cases, issues that Engineers and Customers were having in the field were recorded by Brian so he could make changes in Production at the Factory to make Northern Lights products even better.

They found that, in some cases, customers were overhauling their generators prematurely. Because they had owned competitor’s products in the past who recommended overhauls at 10, 15 or 20,000 hours, they felt that they had to do the same on their NL product. Several customers had done overhauls or repairs at 10 or 15,000 hours to find so little wear that they questioned the value in having done the work. Brian and Tom recommended using oil analysis and valve adjustment measurements to monitor wear, as many Northern Lights generators run well past 30,000 hours with nothing but routine maintenance.

Northern Lights were, once again this year, the only engine or generator manufacturer who attended the show. They have been attending the Show for over 15 years, to meet their customers and get feedback on the performance of their equipment. Customers who attend the ACYM typically own generators that run for extensive periods of time, and are more often than not in distant locations far away from a repair facility. So their generators must run reliably.

Having the new General Manager at the show allowed Brian to hear the Voice of the Customer in order to make changes and improvements to the current product, and get an idea of what customers were looking for in future products.

Two weeks ago, three factory-new Bavaria Monohulls arrived in the BVI to join a fleet of yachts for a major BVI yacht charter company.

The generators chosen by the yacht charter company were the mighty 6kW Northern Lights M673L3. They were installed with sound shields and remote start using the S-3c remote panel.  These tough and compact units are quiet and easily handle the load requirements for the air conditioning & charging on the yachts for charter guests.

A tough but very satisfying installation. 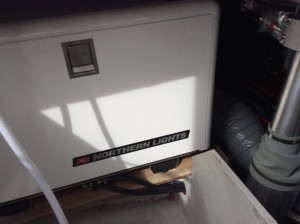 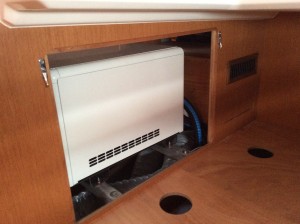 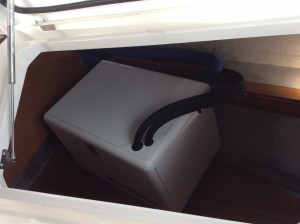